In this week’s module, we have several assigned readings, including four chapters in The Bare Bones Camera Course for Film and Video by Tom Schroeppel. The image following this paragraph is a cover of the book. We are also asked to read three web articles: “Video Pre-Production Planning Check-list—11 Steps to a Successful Project” by Jimm Fox, “12 of the Most Popular Camera Shots all Actors Should Know” by New York Film Academy, and “Storyboarding Tips: How to Plan & Visualize Your Next Video” by Mark R. Robertson. In addition, we are asked to find videos that utilize visual illustration guidelines well. In this module, we started pre-production for our video montage project.

Cover of The Bare Bones Camera Course for Film and Video: 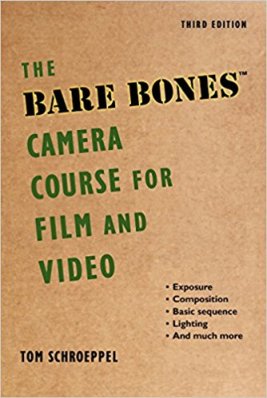 For this week’s reading, we are asked to read Chapter 1, 2, 5 and 6 of The Bare Bones Camera Course for Film and Video. In Chapter 1, Schroeppel talked about the mechanisms behind a camera, exposure for a camera, color temperature, setting exposure for different cameras, setting focus for different cameras, different lenses and the different views they provide, and depth of field. While I have learned many things in this chapter, I find several of his discussions especially interesting. One of those discussions is about the different lenses and the different views obtained from those lenses. From the discussion, I learn about wide angle, normal and telephoto lenses. Wide angle lens shows a larger area compare to normal and objects generally look smaller, while telephoto lens shows a smaller area compare to normal and things appear to be larger. Learning about the different lenses can help me decide what kind of lenses to use depending on my topic. It is also very interesting to learn that depth of field changes depending on focal length, size of aperture and distance of the subject.

In Chapter 2, Schroeppel discussed about the different visual composition guidelines. These guidelines are listed and defined below:

In this chapter, I also learned to survey a location for best shots and arrange things if needed before actually taking them.

In Chapter 5, Schroeppel talked about the different kinds of basic camera moves, which are zooms, pans and tilts. These different camera moves are described below:

Zoom-ins attract viewers’ attention while zoom-outs, pans and tilts give additional information to viewers. I also learned to move slower when utilizing pans and tilts. Additionally, I find his suggestions to begin and end with a good static shot and to use these moves only when necessary to be particularly helpful.

Chapter 6 is a much shorter chapter compared to the aforementioned three chapters. In this chapter, Schroeppel discussed about making montages. I learned that in order to make a good montage, each of the shots in the montage should look different than the other ones.

In his “Video Pre-Production Planning Check-list—11 Steps to a Successful Project,” Fox listed and discussed the eleven steps in pre-production that will help create a successful project. While some steps, such as the approval step, are not quite applicable to the project for our class, some are. I agree with Fox that defining an objective and an audience and developing a main message are both critical for making a good, successful project. Without doing so, the end product may not achieve the purpose for which it is created. I also find it interesting that Fox finds that a shorter video is better, but he made a really good point that people’s online attention spans aren’t long and one really needs to get the message across effectively and succinctly.

“12 of the Most Popular Camera Shots all Actors Should Know” covers twelve different camera shots commonly used in the film and television industry. These twelve different shots are: aerial shot, establishing shot, close-up, extreme close-up, medium shot, dolly zoom, over-the-shoulder shot, low angle shot, high angle shot, two-shot, wide/long shot and master shot. Out of these different shots, I find four shots to be particularly useful to learn about, which are establishing shot, close-up, medium shot and master shots, because they feel more fundamental to me and will most likely to be used by me if I were to include actors in my video. An establishing shot depicts the location of which the shot is taken while a master shot depicts the actors and actions in that location. A close-up shot focus on actors’ facial expressions and eliminates the surrounding environment while a medium shot includes not only facial expressions but also the surrounding environment and the actors’ body language.

Robertson provides some tips for storyboarding in his “Storyboarding Tips: How to Plan & Visualize Your Next Video” article. I find it comforting that I can use stick figures in making a storyboard because I am not confident in my drawing skills. I also agree with Robertson that a good storyboard will enhance the quality of the film. A good storyboard will help save a lot of energy while filing and prevent frustrations with editing.

The following are three videos that I believe illustrate the visual illustration guidelines well:

In this clip, the angle guideline is particularly well illustrated. Starting at 1:34, the camera is filming above Spiderman, showing the audience that he is lying down. In addition, this angle gives the sense that while he is talking to the AI in his suit, he is also talking to the audience because the angle allows the audience to face him and a conversation is usually done face-to-face.

In this clip, the background and rule of thirds guidelines are well depicted. At 0:08, Peter Parker’s face is at the upper left point of the four points where the horizontal and vertical lines dividing the frame into thirds meet.  This allows the audience to focus on the facial expressions he is making when he is watching a video on his phone. Additionally, the background in this frame is blurred out, so while there are movements in the background, they do not take away the audience’s attention from Peter Parker, who is the main subject.

At 3:39 of this clip is a good illustration of the balance guideline. Steppenwolf’s fist is about the same size as Superman’s face, giving a good balance for masses. In addition, while Steppenwolf’s hand appears darker, Superman’s brightness does balance the darker tone.

To me, some of the guidelines, such as rule of thirds, angle and perspective are much easier to depict. I particularly struggled with shallow depth of field and the part in the balance section where we have to take a still photo when panning the camera. I struggled with shallow depth of field because I could not figure out how to make the background blurry with my iPhone, but eventually I was able to overcome that problem by doing a close up of my subject. The struggle I had with the balance section is because my subject is moving too fast and I can’t take a still photo fast enough. My favorite is definitely rule of thirds. I find it easy to visualize the four key points in the frame.

And here is my Pre-Production Planning Document:

I chose my apartment complex as my location mainly because I am moving out soon and would like to have some nice memories of the place. As for challenges, I can foresee that weather might be an issue since I want my shots done on a nice, sunny morning. Whether the flowers will be full bloom is a potential problem too.

View all posts by winniec94